Maules Creek branch of CWA successfully move policy at State Conference to BAN unconventional gas. The motion was passed on the 25th of May, day 1 of the 3 day conference. 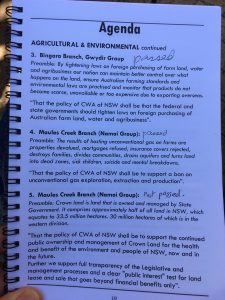 “That the policy of the CWA of NSW shall be to support a ban on unconventional gas exploration, extraction and production.”

Congratulations to the Maules Creek branch and their delegates, who have led the way again on CSG.

We now await further statements from John Barilaro, leader of the national party who said only days earlier that the industry should be expanded in NSW.