The Leard Forest is an 8000 Ha biodiversity hotspot recently identified as a Tier 1 Biodiversity Area by the NSW Government in the draft New England-North West Strategic Regional Land Use Plan (SRLUP). The SRLUP states that Tier 1 areas ‘cannot sustain any further loss’ and are ‘critical to biodiversity persistence’ but then does nothing to protect such areas from mining.

Leard State Forest is the largest remnant left on the heavily cleared Liverpool Plains and provides habitat for up to 34 threatened species including the Koala and the Masked Owl, pictured above.  The proposed and existing mines will clear 5,000 hectares of bushland – which equates to almost 10,000 football fields or 50,000 standard house blocks.

Leard State Forest contains over 1,500 hectares of Box Gum Woodland which is listed nationally as a critically endangered ecological community by the EPBC Act, with 1,100 hectares earmarked for clearing. It is undoubtedly one of the largest and most intact stands of Box-Gum left in Australia, with over 100 hollows per hectare recorded.  Hollows are needed by many Australian animals for nesting and roosting. 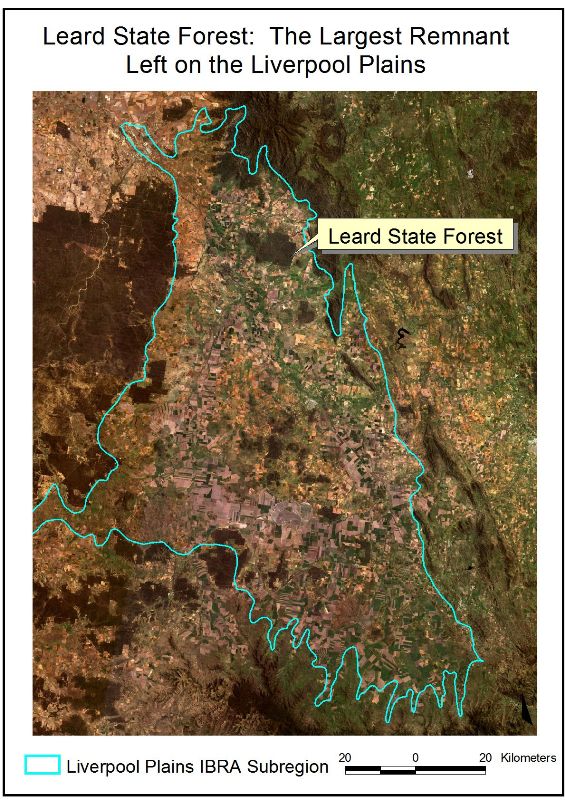 Adjoining farmers are not allowed to clear Box-Gum woodland of this quality under the Native Vegetation Act 2003 but miners are exempt. Purchase of farmland with small, disturbed patches of remnant vegetation is being used to offset the impacts to the Leard Forest, but they do not match it on size, configuration or vegetation condition.

There have been a number of environmental incidents with the existing mines after large rainfall events this year (2012), raising concerns if the proposed expansions go ahead. The Boggabri Coal Mine obtained approval to discharge 700 million litres of water that had accumulated in its pit into a tributary of the Namoi River. Two penalty infringement notices were issued to the Tarrawonga coal mine for an incident in January 2012 when a surface diversion bank failed and water entered Goonbri Creek.