The proposed mine complex will convert the beautiful Leard forest into an enormous dust bowl – producing an estimated 18,000 tonnes of dust per annum that will land on adjoining farms. The southerly prevailing winds, inversion layers (that are present 41% of the time generally and 69% over winter) and the “catchers mitt” topography provided by the Nandewar Range to the north means that the air quality impacts will be concentrated over the farming district of Maules Creek.  Our local community will have no choice but to breathe in the dust and particles and drink it in our water (which we catch from our rooves).

There are well recognised and very serious human health risks from coal dust.  Doctors for the Environment state that “Each phase of coal’s lifecycle: mining, disposal of contaminated water and tailings, transportation, washing, combustion, and disposing of post-combustion wastes, produces pollutants that affect human health…Communities in which coal mining or burning occurs have been shown to suffer significant health impacts“.

Extraordinarily, there has been no Australian overview of the health effects of coal mining on residential areas in coal mining regions.  According to Doctors for the Environment there is strong evidence from other countries that coal mining communities have an “increased risk for developing cardiopulmonary disease, chronic obstructive pulmonary disease, hypertension, other lung diseases and chronic kidney disease. Death rates for these diseases [are] higher in coal-mining areas compared to non-mining areas“.

Despite these very serious risks, there has been no health impact assessment conducted in the Maules Ck area, and the cumulative air quality impacts of the three proposed mines have not been properly assessed.  The air quality modelling by the mines in their environmental assessments ignored the topography and substantially under-estimated the dust impacts.  Analysis by MCCC suggests that the area affected by coal dust may be as large as 67,000ha, which is many times greater than that estimated by the mining companies.

The Planning Assessment Commission which was tasked with conducting a merits review of the mines did not consider the cumulative impacts of all three mines on air quality.  Instead of requiring the work to be done before the mines are approved, it recommended that the mines are approved first and then the air quality is ‘monitored’ afterwards.  We think this is putting the cart before the horse, with serious risks to our health and communities, and believe it breaches the Terms of Reference set for the Planning Assessment Commission.

But this is a joke……for a bit of light relief having got through all the heavy stuff above, we bring you King Coal and his Community Health Plan: 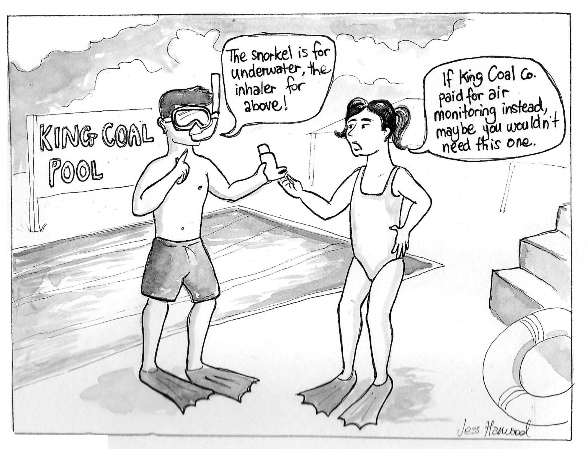