Jonathan Moylan meets with ASIC today. ASIC have been urged by a wide range of commentators to throw the book at him although legal opinion varies as to which page that will be. The fact that Jono’s spoof was publicizing a cause, that he is not part of a corporation and that he didn’t profit financially leaves serious questions as to our democracy and the right to freedom of speech.

Freedom of speech is a tricky thing and it’s not just the tech savvy activist who are inclined to take liberties with the truth.

When the current Premier of NSW asked us to trust that “the next Liberal/National government will ensure that mining cannot occur … in any water catchment area … no ifs, no buts, a guarantee” many including the NSW National Party would have taken him at his word. As Sydney’s drinking water catchment is being targeted by longwall mining and CSG exploration, the Liberal/National government is standing idly by. 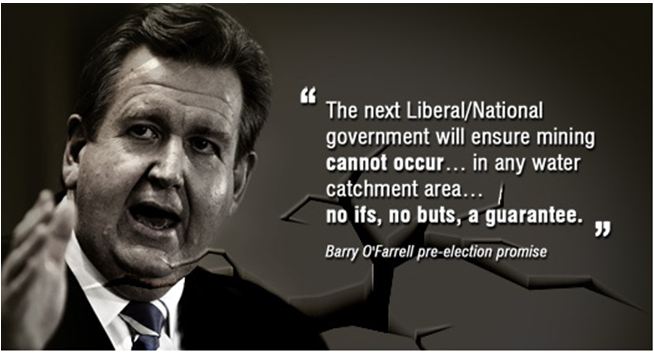 Yet there are no tabloid calls that the comments are “un-Australian”, there are no howls of derision from the Minerals Council and there are no calls on ASIC to investigate unwelcome price movements to ASX listed property trusts or to the property market generally, based on the widely reported comments.

Like Jono Moylan, the former opposition leader made these comments to further his cause and the statements were made in the media and not formally to the ASX. Unlike Jonathan Moylan, these statements helped him to become Premier of NSW and in doing so benefitted him financially.

However “no ifs, no buts, a guarantee” is unlikely to move ASIC and even falsely made market sensitive information can be missed by the corporate watchdog.

Further information in his recent article in Crikey One set of rules for the powerful, another for coal activists, Schwab outlines how “large corporations provided misleading information to shareholders” and “executives personally benefited from their illicit actions”.

The reported costs to shareholders were of massive proportions. Schwab goes on to say that despite mis-stating liabilities to the tune of $2.1 billion dollars “ASIC has never taken any criminal action against any director of collapsed Allco Finance Group”. Neither have any of the directors of failed ABC Learning been criminally convicted and that “the charges were quietly dropped last year”.

Taken in this context the alleged charges against Jonathan Moylan look more like a witch hunt than a serious move by the regulators.

The real story of Jonathan Moylan’s hoax was the fact that he successfully used the tactics of the rich and powerful and he used them to expose to the wider public the Maules Creek Project for what it is, a huge open cut coal mine in an environmentally sensitive biodiversity hotspot being financed by ANZ. One would think more akin to a third world country.

Since then new evidence has emerged as to the biodiversity offsets package regarding this mine. The report uncovers misleading and inaccurate statements provided to planning authorities as to the size, condition and composition of vegetation on the offset properties. The findings mean that the offsets do not and cannot meet the guidelines required for EPBC approval.

The timing of the hoax has  focusd attention on the approval role of Environment Minister Tony Burke. Minister Burke has the information and if he is fit to hold his office and properly administer environmental law, he will reject the Maules Creek Coal Mine.

Koalas tell Santos: get ‘on ya bike’ Sharyn Munro at Maules Creek Hall