One rule for mining and another for everyone else

Now that water has stopped flowing across Elfin crossing without any obvious explanation, residents are extremely concerned that the lost alluvial groundwater is in the bottom of the Maules Creek coal mine.

The lack of transparency by the mine leads to more suspicion. Departmental investigations continue even though there is a clear lack of water going across Elfin Crossing. When there was less than 1 ML / day flow at Elfin Crossing it warranted action in the 2000’s when locals were involved, but not now.

Departmental officials have used the excuse that the water inflow into the mine pit is unable to be prevented, even though the groundwater zone 11 licences held by the mining company to offset the groundwater impacts are general security take.

General security licences require that water extraction must be switched off when requested. There is a historical precedent set in Maules Creek for general security licence holders to stop irrigators extracting water when the Minister issued a s324 direction the last time Elfin Crossing stopped flowing.

What we are seeing now is one rule for mining and another for everyone else.

The reality is that the groundwater inflows into a mine can be switched off – it just depends on how badly its needed.

Back in 2011, the Tarrawonga coal mine really needed it and it prepared a EIS for its mine extension with a plan to do just that.

The mine proposed (and the Planning Assessment Commission (PAC) approved) the latest expansion to include a Low Permeability Barrier to prevent water inflows to the mine from Goonbri Creek. 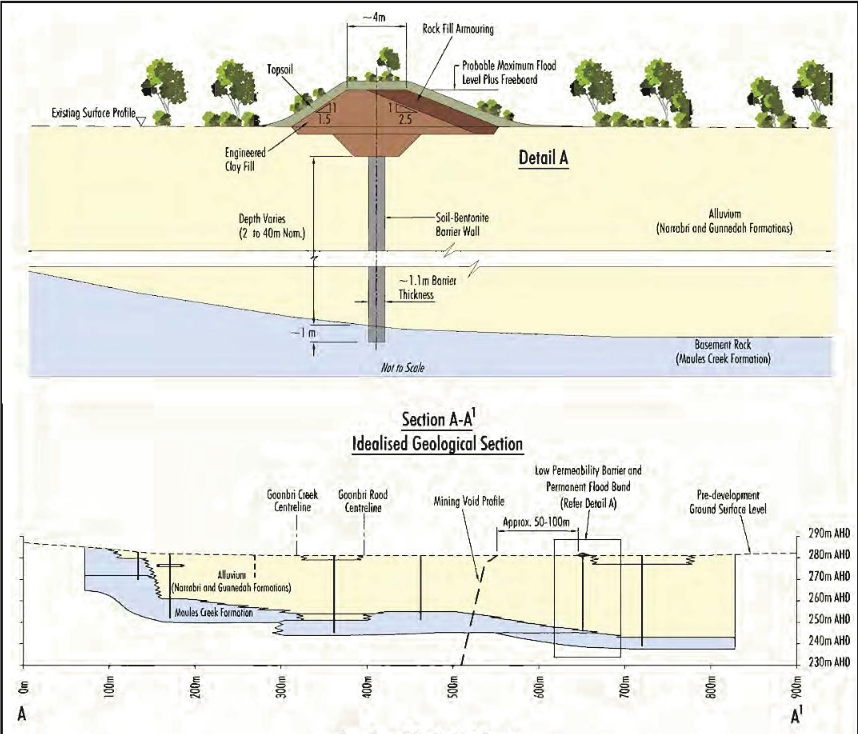 It seems that a low permeability barrier ticked all the boxes for the PAC as the Tarrawonga EIS Executive Summary explained on page 8;

“A low permeability barrier would be constructed using a soil-bentonite mixture in the alluvial sediments (Figure ES-3) to meet the following design objectives:

This shows that prevention of groundwater drainage could be prevented at the Maules Creek coal mine too.

If there is a risk of alluvial groundwater draining into the pit, then as shown by Tarrawonga, it is reasonable and feasible, for the mine operator to install a impermeable barrier to protect the groundwater. It might be a tad more expensive at Maules Creek, but there is an option and all it needs is a government to make that decision.