The CSG advertising in Australia is built on a lie. And that lie is “its about the jobs” or about the export induced “gas shortage”. It’s all about the profits as this Dart Energy Graph from Oct 23 2012 presented at the Gas Supply Contracts Conference shows. 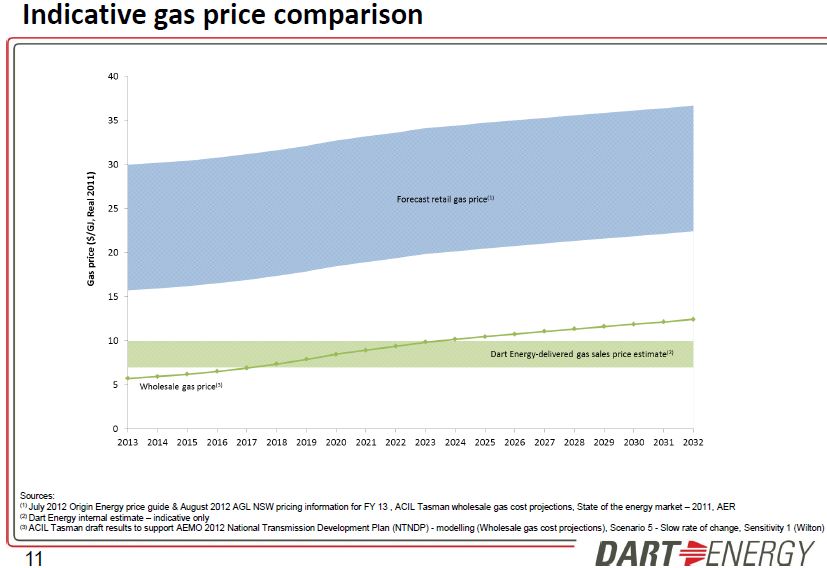 Such state sponsored price gouging is being promoted by state and federal resource ministers alike.

In the north west NSW Santos are relying heavily on a price rise in CSG from $4 to $8 or $9 a Gigajoule. Santos who say they will only operate in the Pilliga Forrest in NSW and on farms where landholders welcome CSG. But David Knox has indicated that the stage 1 development in the Pilliga involves the development of infrastructure before they expand further onto adjacent farmland.

All this gas will go to Gladstone for export through the GLNG plant leaving NSW and the east coast high and dry.

The Australian Industry Group have a completely different view. For every $1 of export income there will be $21 lost to the Australian Economy according to the report in the Newcastle Herald 17.10.2013.

For Australian farmers the price of fertiliser will sky rocket as the major input to the fertiliser production process is Gas. The Australian quotes Incitec Pivots Chief Executive James Fazzino  as saying it “as a crazy outcome” to “unnecessarily expose Australians to Asian energy inflation

Unsurprisingly Santos does not want to see a reservation system for domestic consumers as this would keep a lid on domestic prices and cause capital under-utilisation.

Meanwhile BHP have plenty of Gas according to Head of Gas Operations Mike Yeager;

“But it’s more important to let the citizens of Victoria and NSW and to some degree even Queensland (know) there’s plenty of gas to supply those provinces indefinitely and we’re available to be part of that,” Mr Yeager said.

“We have gas for sale and we’ll work with anybody at any time,” he said.