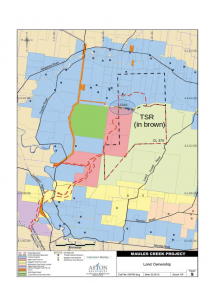 ironment decision to prevent Whitehaven coal’s Maules Creek coal mine from clearing in winter a section of the Travelling Stock Route (TSR) that is adjacent to the Leard State Forest.

“The designated clearing window between 15 February and 30 April is in place to prevent vulnerable fauna from being harmed or killed due to hibernation, nesting or raising young.” said Ros Druce.

“The company had plans to renege on its 2014 undertaking and sought permission to carry out ‘limited’ clearing of 11 Ha of native vegetation in ‘exceptional’ circumstances outside the mandated clearing window.

“We do not believe that clearing 11.9 Ha of a crucial element of the Biodiversity Corridor can be considered in anyway ‘limited’. Nor do we consider the circumstances to be ‘exceptional’.

The 2014 undertaking by Whitehaven was agreed to by the MCCC and the Dept of Planning. The Dept said about the undertaking on the 23.10.2014:

“The Department has welcomed the mining company’s changes to the (environmental) plan, which incorporate advice from the Office of Environment and Heritage to strengthen environmental protections and address community concerns.”

The decision to prevent Winter Clearing follows an Independent Audit1 which shows that Whitehaven coal was not compliant with 61 conditions of its planning and environmental approvals.

“This is a warning to residents who live near the proposed Vickery coal mine. Years after the decision to go ahead, the company is still not compliant with the so-called ‘strict conditions’ and it is constantly working to water them down.

“The problem for the impacted community is that it is like living on shifting sands. Nothing that the company says or indeed, the planning approval requires, can be taken as certain.

“In January, this year the company quietly sought and received a third modification to its Maules Creek coal mine planning approval for permission to put more traffic on our local roads and reduce to zero the level of community consultation required when submitting its ‘management plans’.

“Our expectation is that there should be no additional concessions to Whitehaven until the company becomes fully compliant with the existing planning and environmental approval conditions.

“We encourage the Department to act more decisively on breaches of any exceedances of the mines conditions, particularly those that relate to dust and noise and not merely issuing fines that are a light slap on the wrist.

“This company has made much to its shareholders of its ability to contain costs but it says nothing of who is bearing the real cost. The community and the environment.