In Narrabri Local Court today, Lock the Gate campaigner Carmel Flint was acquitted of three charges arising from a protest at the Boggabri Coal mine last year.

Ms Flint had been charged with entering and remaining on inclosed land and hindering the working of mining equipment.  The latter offence carries a maximum 7 year gaol term. 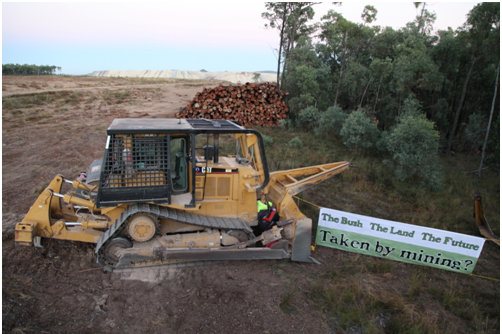 Another local citizen, 84 year old birdwatcher Russ Watts, had charges against him for a separate protest last year at the same mine withdrawn earlier this week.

This follows the recent withdrawal of charges against two women from Fullerton Cove for a protest against coal seam gas mining in their local area last year.

“My acquittal and the withdrawal of charges against Mr Watts and the Fullerton residents suggests that the police pursuit of community protestors has been heavy-handed and unnecessary.

“We are now asking the NSW police to show equal vigour in enforcing the law against mining companies and pursuing the legal cloud hanging over the Maules Ck coal mine.

“In particular, we are calling for a police inquiry into the recent leaking of documents relating to the Maules Ck mine which led to its subsequent approval  by the Federal Environment Minister.

“We believe the NSW police should be urgently investigating the source of the leak, for what purpose the documents were leaked, and whether the mining company had any involvement.

“As the long shadow of the ICAC corruption inquiry hangs over the administration of mining in NSW, the police should be taking the strongest possible action to prove to a concerned community that the mining industry is not a law unto itself.

“I would personally like to thank my solicitor, Peter Long, for his generous and capable representation in court today” she said.